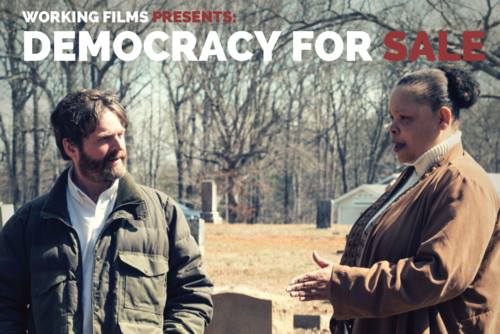 Join the Alamance NAACP for our free screening of “Democracy for Sale,” an eye-opening documentary about poverty, income inequality and the influence of big money in NC politics, starring actor Zach Galifianakis and featuring many leaders of the NC Forward Together Moral Movement including Rev. William Barber.

Democracy for Sale – Mark your calendar for June 11th to see the upcoming film screening of Democracy for Sale, starring Zach Galifianakis and made in North Carolina. North Carolina — perhaps more than any other state in the Union — has been transformed by the new and growing tidal wave of political spending. Galifianakis, the comic star of “The Hangover” movies, travels back to his home state to investigate how North Carolina has become a bellwether for how the money of a few has come to dominate our democracy. Galifianakis investigates allegations that the current state government was put in power by moneyed interests and has thus carried out a program that only benefits its backers: cuts to education, healthcare spending, and environmental protection; lowering of taxes for the wealthy and corporations; and the passage of laws designed to roll back access to the ballot.

Question and Answers with the filmmaker and cast members of Democracy For Sale, directly following the screening with

WHAT:           Democracy for Sale – free film screening, followed by a discussion of the documentary and an ANAACP Open House

The Alamance Branch of the NAACP thanks you for supporting these events.

FORWARD TOGETHER! NOT ONE STEP BACK!